Trains heaped with coal pass through Richmond every week on their way to the city’s port.
In Parchester Village, a largely black and Latino neighborhood in northwestern Richmond, residents say coal dust blows off the open mounds, covering the grass and coating their screen doors.
“This little neighborhood, nobody seems to care about,” says Paul Marquis, who moved to Parchester Village three years ago.
Marquis says in the last year, he’s seen more trains go by, and more black dust on his property.
“It’s everywhere,” he says. “If your truck sits here for two, three days without moving you can write your name on the front.”
To demonstrate, Marquis pours a bucket of water down his screen door.
It runs off dark.
--“Coal dust worries Richmond Residents,” KQED Science, June 22, 2015 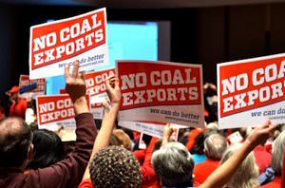 At the Levin-Richmond Terminal, which at its peak moved more than a million tons of coal per year, the wind blows over massive uncovered piles of dirty coal, carrying toxic dust into nearby neighborhoods and into the Bay. Coal dust is laced with toxins such as arsenic, lead, and mercury; and prolonged inhalation is linked to chronic bronchitis, emphysema, and cancer. According to the Sierra Club, “each open-top rail car can lose up to 600 pounds of coal dust on the journey from the mine to the port; this translates to 60,000 pounds of toxic fine particulate matter entering our air and water for every trip made by a coal train.”

Activists have worked for years to curb exports of coal and petroleum coke (petcoke), which not only create local health impacts but also spell climate disaster. A Clean Water Act lawsuit filed by Baykeeper introduced some improvements: in 2014 the company agreed to enclose the conveyor system it used to load the ships and to pause operations on very windy days. This helped prevent coal from dropping and blowing into the Bay, but unfortunately did nothing to address the coal dust problem.

Shortly thereafter, the Richmond City Council passed two resolutions: one calls on the Bay Area Air Quality Management District to ensure that all piles of coal and petcoke to be stored in enclosed facilities. The other opposes the transport of coal and petcoke along waterways and through densely populated areas, and prohibits exports from city land. Those were important signals, but much more needs to be done to protect our community’s health.

Environmental activists vowed to redouble their efforts on the Levinson-Richmond terminal at a campaign meeting at the Bobby Bowens Progressive Center.