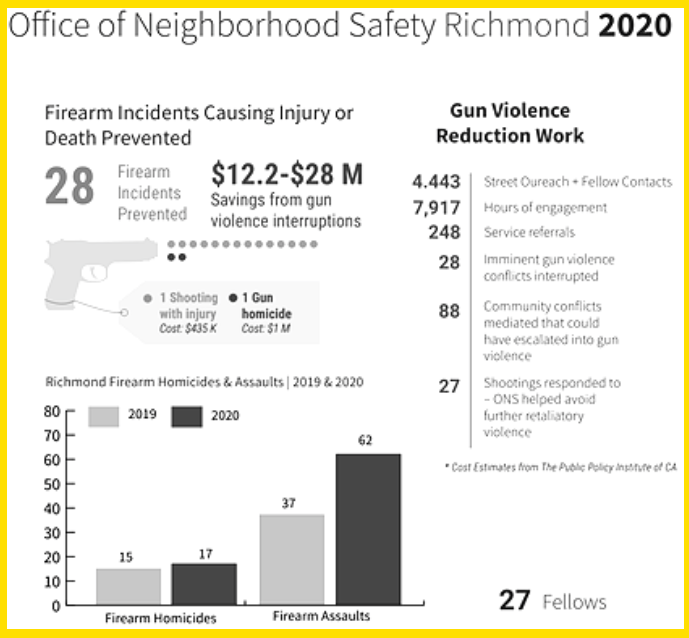 One recurring worry about the Reimagine Public Safety Community Task Force  proposals has been the accusation that the Task Force is recommending untested public safety practices. Critics and concerned residents both, particularly those with memories of Richmond’s violent crime rate through 2010, have expressed understandable anxiety about the return of rampant gun violence and indiscriminate shootings. But these fears and anxieties are unwarranted. Richmond already has a proven program in place—the Office of Neighborhood Safety (ONS). What ONS needs is adequate funding to expand and continue their groundbreaking work.

Richmond began the work of reimagining policing in 2007, when it established ONS. At the time, Richmond was ranked the ninth most dangerous city in the country, and previous efforts to curb shootings and other violent crime yielded little discernible success. The ONS was not shy about taking a new approach: it would not be another arm of Richmond’s police force. Instead, the new program harnessed deep knowledge of our community, data aggregation, and cutting-edge theories about violence to craft its strategy.

This third  point—addressing the nature of street violence—underpins ONS’s  operation. Rather than viewing violent crime as individual moral shortcomings, ONS built its services around the conception of violence as a social epidemic, infecting those who most often come into contact with it. The job thus became to protect the community from its spread, inoculating the most vulnerable members of Richmond with robust intervention and mentoring.

ONS staff use a multidisciplinary research method to assess which residents are most likely to either shoot someone or be shot themselves. These individuals are then contacted and, if they agree to join the fellowship, receive counseling, job training, mentorship, and a stipend (after demonstrating measurable commitment to the program).  This program, formally called the Operation Peacemaker Fellowship, has become nationally hailed as the “Richmond model.” Its achievements have received widespread and prominent attention. Kaiser Permanente, an initial private funder of the initiative, declared that ONS has triumphed in “diffusing community tensions and reducing violence.” The National Council on Crime & Delinquency (NCCD), in its 2015 study of the ONS, concluded that “the framework of the Fellowship could be used to improve outcomes for communities across the country.” At the time of the publication, the NCCD also noted that 94% of fellowship participants were still alive, and 79% had not been arrested or charged with  any gun-related offenses. ONS has mediated approximately 88 community conflicts that the office and law enforcement alike have credited for preventing further violent escalation.

Its impacts can also be measured financially. A shooting with a firearm injury costs the City $435k, while a shooting-related homicide can cost upward of  $1 million. ONS data indicates that the program has prevented 28 firearms incidents, saving the city approximately $12.2 to $28 million over the past 14 years. .

Two things underscore the success of ONS. First, it has been established as a highly effective alternative to policing in Richmond, with a proven track record of reducing gun violence and retaliatory activity. Since the ONS was launched in 2007, Richmond’s violent crime rate has dropped significantly, outpacing the national decrease in homicide rates by a notable margin. That the program’s work has been so effective at preventing violent crime suggests that it is worth funding more robustly  (the Public Safety Task Force has requested that $ be taken from police vacancy funding sources to further build out ONS).

Second, and no less significantly: the Office of Neighborhood Safety truly provides an alternative, reimagined approach to our City’s safety. They do not work with the police; they do not share information with law enforcement; and thus, program staff can truly provide support to and build rapport with participants. And it has worked in a city formerly considered irrevocably violent. The Task Force’s proposals, then, are simply augmenting a part of our city services that truly, measurably decrease violent crime.