How to watch the meeting

The meeting will begin at 6:30 pm. You can watch on TV or via streaming video on the City’s website ci.richmond.ca.us. You might have fewer technical problems by going to KCRT youtube channel.

If you're thinking about running for Richmond City Council and would like an endorsement from the RPA, the time to act is now!

Read about the process and download the questionniare.  Your answers must be submitted by September 1, 2019.  Interviews will take place in September.  The final decision about endorsements rests with a vote of RPA members. 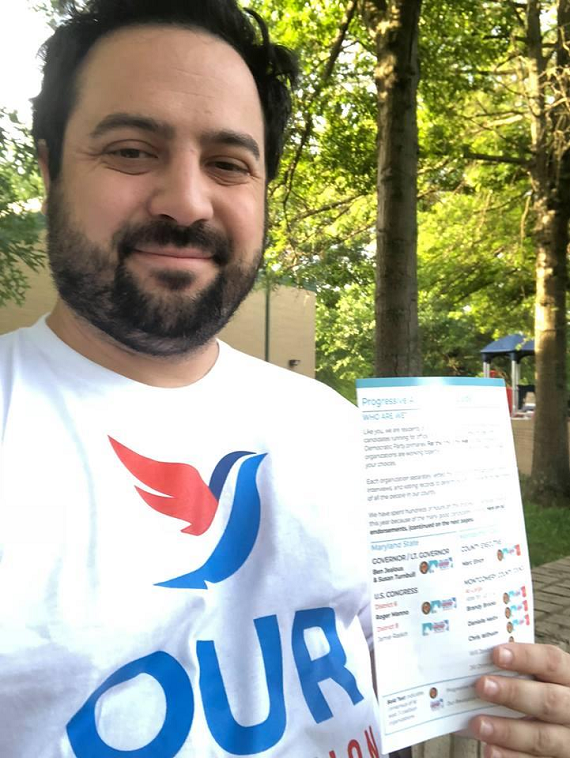 David Duhalde is a DC-based political and socialist activist, and is the current Political Director of Our Revolution – a progressive political action organization inspired by Senator Bernie Sanders’ 2016 presidential campaign.

Mark your calendars for a discussion with David: “How Can Our Revolution Work More Closely With East Bay Progressives?” hosted by the RPA. It will be held at Steve Early’s house on Monday, February 18, from 3-6pm (747 Lobos Avenue, Richmond). Beer, wine, and snacks provided. (Additional food or drink contributions welcome!)

This month, The Activist sat down with Eduardo Martinez, who started his second term as Richmond City Councilmember, to discuss some of his priorities for 2019.

TA: You are one of the environmental leaders on the City Council. What are some of your main concerns these days?

EM: I continue to be concerned about the climate and local health impacts of coal movement in Richmond. On Tuesday I will have a tour of Richmond Levin Terminal, along with city staff. The Levin terminal moves over a million tons of coal per year.

I recently submitted an agenda item to stop the storage and handling of coal in Richmond. Staff are now reviewing a proposed ordinance. For example, they are coming up with an amortization schedule to account for the possible economic loss from not being able to move coal. This will prevent the company from claiming a “taking.” Of course, Levin has lawyered up, and are trying to let the city know that they are not going to take this easily.

"They Deserve the Death Penalty"

According to an ACLU public records act request, an October 2017 Tom Butt e-forum blast incited a reader to respond to Butt that RPA members Eli Moore and Claudia Jimenez "deserved the death penalty... or worse." In an effort to scandalize the RPA, Butt's e-forum had falsely claimed, among other things, that Moore and Jimenez were not paying taxes on an “unpermitted” building on their property.

Butt's e-forum also revealed their address, making it easier for Butt's sympathizers to take their vitriol offline and engage in real-life threats and harassment. Indeed, Moore and Jimenez report that, after Butt doxxed them, their tenant (who now lives in their house) saw a woman hiding in the bushes in the front yard taking photos. "Mayor Butt’s inclusion of our home address served no purpose, except to potentially endanger the current residents of the house," Jimenez said in a medium.com blog. Given the intimidating emails Butt provoked, “this risk of danger is real.”

The blog sets the record straight about a number of allegations in Butt’s e-forum. It summarizes key findings from the 58 documents revealed by the ACLU public records request. In it, Jimenez questions why, if Butt had thought they had an unpermitted building, he did not just notify the appropriate city and county agencies and instead contacted Moore’s employer to “verify” allegations of housing law violations. She charges that Butt’s main aim was to whip up opposition to the RPA and to retaliate against Moore and Jimenez for “political differences and disagreements about issues of rent control, gentrification” and other policy matters. Ultimately, she concludes that “We need a mayor who focuses on Richmond’s real issues, not attacking constituents for disagreeing with him.”

Diana Becton is a Great DA

Judge Becton is CCC's first female African American DA, and she is filling the position vacated by Mark Peterson after he resigned amidst a campaign finance and ethics scandal.

Becton received highest marks on a CCRJC community scorecard that ranked candidates on a range of issues, from bail reform to support for re-entry services. Although Becton’s current term only lasts until January 2019, as the incumbent she will have an advantage for the June 2018 elections.

This is a significant victory, as DA is the most powerful elected official within our criminal justice system and can be an important force in reducing excessive sentences, ending mass incarceration, and reducing racial disparities. Please consider meeting her at this community town hall, and communicating to her the importance of ensuring equal outcomes for people of color in our justice system!

"Mark Gagan is an outstanding example of a community minded police officer. I have always known him to be hard working, open to the whole community and fair. I so much respected his work, I had suggested that he be considered as chief when the position was open. I also believe that Chief Brown is doing an excellent job under very trying budgetary
circumstances.

I have no information about the charges brought against Mark or his involvement in my case but from my experience with him, and until I have contrary information, I would think he may be the victim of internal police department politics." 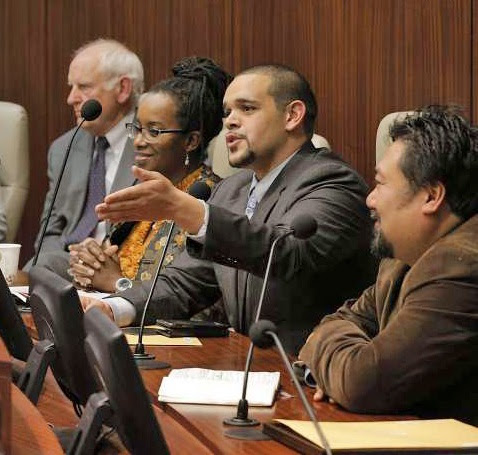 On December 15, Richmond Councilmember Melvin Willis announced that he is running for mayor of the City of Richmond in the November 2018 election. The announcement was made at the Richmond Progressive Alliance (RPA) holiday party, to a joyful crowd of supporters.

“Many people have contributed to Richmond’s transformation in recent years, and we are thankful to all. At the same time, many challenges remain, and a much better Richmond is possible!” said Willis.

Melvin Willis, a community organizer with Alliance of Californians for Community Empowerment (ACCE), made history in 2016 when at 26 he became the youngest councilmember ever elected in the City’s history. He received the highest number of votes in the race, and his success was crowned by the passage in Richmond of the first Fair Rent Control and Just Cause for Eviction law in California in 30 years, a ballot initiative at the center of his campaign.

At the announcement, Willis was flanked by Vice-Mayor Jovanka Beckles and Councilmember Ada Recinos. In addition to Beckles and Recinos, Councilmembers Ben Choi, Eduardo Martinez and two-term former Mayor Gayle McLaughlin have all endorsed Willis’ candidacy.

“Melvin has the values, the vision and the commitment to lead Richmond to a higher level of progress and to make it a better city for all our residents. He thinks globally and organizes and mobilizes locally. He is thoughtful, caring, gentle and generous. People know him and love him. Melvin is the best of Richmond,” said former Mayor Gayle McLaughlin.

During his announcement Willis stressed that the important achievements that have transformed Richmond over the past decade and are inspiring many other communities throughout the nation need to be defended against undermining measures at higher levels of government.

“As Mayor I will lead all those in Richmond willing to work to make our city better. Together we will sustain our accomplishments and keep folks in their homes, fight pollution, defend immigrants’ rights, improve our schools and libraries, and continue our progress in reducing violent crime. I will promote a community participatory process for the city budget. I will respond to the needs of our youth, I will focus on the creation of affordable housing, and my doors will always be open to every resident of our community to hear their thoughts and ideas,” Willis added.

Willis affirmed that his campaign for Mayor will be based on peoplepower and neighborpower, and free of corporate donations. He rejects the corrupting influence of corporate money and invites all residents to support a one-person, one-vote true democratic election.

Rising to the Occasion

“Nearly all men can stand adversity, but if you want to test a man’s character give him power.” --Abraham Lincoln

For those of you who read Mayor Tom Butt’s e-forum, you no doubt have noticed how bitter he has become towards the Richmond Progressive Alliance.

His latest tactics – leaking private emails, sharing peoples’ home addresses, contacting their employers – are as low-down dirty as any corporate-funded political attack ad we’ve seen in this city … and we’ve seen plenty. To have it come from a sitting mayor is unseemly at best (can you ever imagine Gayle McLaughlin ever doing this?), and an abuse of power at worst. (How many private citizens have to worry about their Mayor spending hours digging up dirt on them and publicizing it?)

And to have it come from Mayor Butt, who has generally been above these kinds of smear tactics and decried them in the past, is just plain disappointing. The night after the 2016 elections, when we were all reeling from a vicious and degrading political season, the RPA and RPA-endorsed electeds released a statement saying,

At times, the members of the Council will surely disagree with each other about the best ways to solve Richmond’s many challenges. Our city will be well-served when decisions are debated with rigor, passion, and civility. Given the extreme challenges from the outcome of the presidential election, our national government may be wracked by division and malice, but in Richmond, let our Council demonstrate how dissent and decency can co-exist.

We look forward to working with Mayor Tom Butt and Councilmember Jael Myrick in a spirit of constructive collaboration. There is common ground in many areas and it is land worth cultivating. Let us all bring our best selves to the table and rise to this occasion.

The statement was written in hopes that political discourse in Richmond could show that “dissent and decency can co-exist.” But Mayor Butt’s malice towards the RPA isn’t coming from radically different policy views (e.g. both Butt and the RPA agree about the importance of ensuring affordable housing, but disagree on the strategies), but rather a threat to his power. Butt is the most entrenched part of Richmond’s political establishment. He’s held power for 22 years, and doesn’t intend to let go in 2018. Now he is faced with young, diverse and dynamic new leaders.

A group of leaders who are rooted in the movements for clean energy and the rights of low income and working folks. Who are not backed by corporate money but hundreds of volunteers who believe in them and their vision. Who represent the future and all our hopes and dreams for it.

Many of us are inspired by this future and joyfully moved to action. Others are threatened and lash out.

In case you missed it, a recent Richmond Confidential article covered Tom Butt’s recent attack on Eli Moore and Claudia Jimenez, two RPA members; and the ACLU’s plans to consider getting involved

Opponents – and even supporters – of Tom Butt say Richmond’s mayor is guilty of what one critic described as a “flagrant abuse of power” and a council member called “highly inappropriate” actions.

Emails between the mayor and residents, obtained by Richmond Confidential, indicate that many in the community were alarmed when the mayor used his regular “e-forum” to doxx political adversaries, sharing their home addresses and accusing them of violating Richmond’s rent control ordinance.

Butt rejects claims that he overstepped his bounds and has steadfastly defended his actions. But the drama could move outside City Hall, as the American Civil Liberties Union of Northern California is reportedly looking into the controversy.

It all began earlier this fall, when Richmond Confidential quoted resident Eli Moore in an October 3 article about a new ferry service coming to the city. Butt, a major proponent of the ferry, took issue with Moore’s assessment that, while the ferry will greatly improve access to San Francisco, many residents will not benefit equally from the service.

A day after the story’s publication, in his weekly email dispatch known as the “Tom Butt E-Forum,” the mayor responded to the article by accusing Moore of “embracing the dark side.”