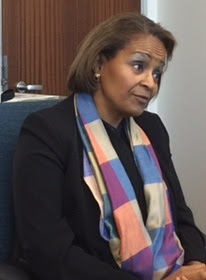 The healthcare structure of Haiti is inadequate to address the many compounded problems exacerbated by poverty, earthquakes, hurricanes, and high mortality rates due to AIDS. Disabilities and mental illness are simply not dressed. Only 36% of childbirths take place in medical facilities. Abortions are punishable under law and therefore not performed by professionals resulting in a 20 to 30% rate of mortality.

Dr. Narcisse ran for president to bring change to Haiti and address these problems. The presidential election of 2015-2016 was rigged, fraudulent and corrupt and still the results were endorsed by the US Department of State. Many persons known to be dead were shown as registered voters.

Dr. Narcisse, political organizer and activist, does not give up and fights with her people for  free and fair elections which will result in her being free to bring change and progress to Haiti.