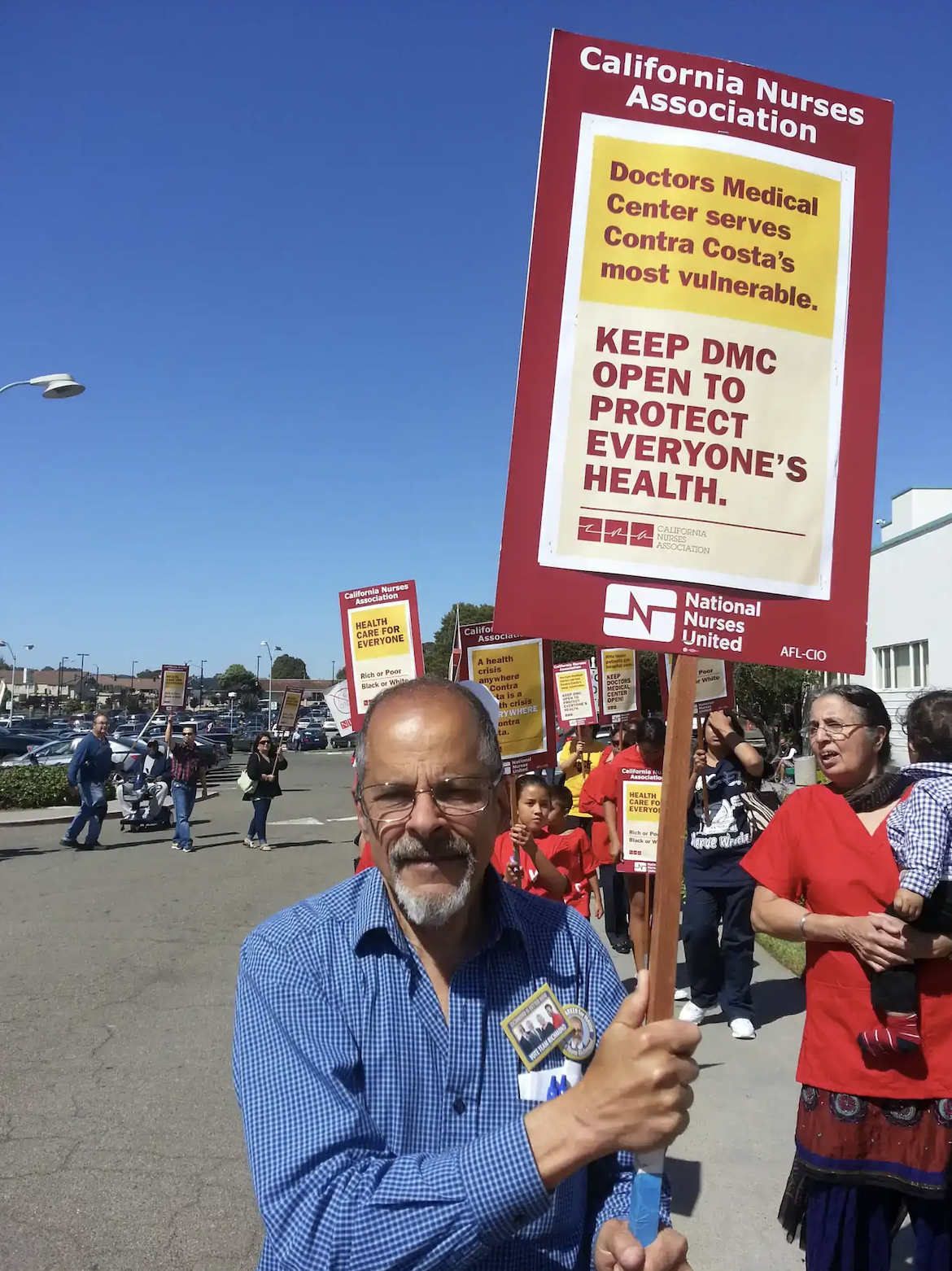 East Bay Democratic Socialists of America (EBDSA) member Mike Parker passed away late on Saturday night at 81 years old after a year-long fight with cancer. He was not only a warm friend and mentor to me and so many others, but a brilliant and one-of-a-kind movement builder. An activist and socialist since the age of 19, Mike’s work spanned over 62 years of movement history. He made unique contributions to the labor movement, the fight against racism, and the fight for an egalitarian, peaceful, and ecologically sustainable world. His wisdom and endless generosity has been invaluable for us since DSA’s 2016 rebirth. Mike’s death leaves the socialist movement greatly impoverished, but his life enriched it beyond measure.

Mike is well known as a writer and labor activist; leader of and contributor to Labor Notes since its founding in 1979; for his book, coauthored with EBDSA member Martha Gruelle, Democracy Is Power: Rebuilding Unions from the Bottom Up, known as the book on democratizing the labor movement; and his groundbreaking writing on “lean production” with Jane Slaughter.

Starting in 1975, Mike worked for over thirty years as an electrician in the auto industry in Detroit, which was the home base for Mike and his comrades’ labor organizing as rank-and-file members of the United Auto Workers (UAW) and other unions. As Mike and Martha wrote in their book, “The goal of our movement is not just bigger unions. It’s for working people to function as human beings — not bootlickers, not cogs — starting with our jobs, where we spend most of our waking hours.”

At Labor Notes today, Teamsters for a Democratic Union (TDU) organizer David Levin says Mike helped Teamster reformers understand and defeat the implementation of lean production and company-union cooperation schemes in the 1990s — laying the groundwork for the national UPS strike in 1997. Labor journalist and former Communications Workers organizer Steve Early likewise credits Mike with helping “debunk” these schemes within CWA in the 1980s. Mike and Jane Slaughter led numerous trainings on the subject for union activists across the US and as far away as Japan and Brazil.

Since moving back to California in 2007, Mike has been a central leader and beloved mentor in the Richmond Progressive Alliance (RPA), a close ally of EBDSA. RPA is a unique electoral and movement organization. They have repeatedly elected progressive majorities to Richmond’s city council and fought against corporate power — most famously going up against the oil giant Chevron, which runs a large refinery in Richmond — to lead the state of California in progressive policies. In 2018, Mike was a co-manager on socialist and Richmond city councilmember Jovanka Beckles’s State Assembly campaign, and he played the key role in bringing EBDSA into that project. True to his personality, Mike continued his work in local politics throughout his year-long fight with cancer, advising activists, attending meetings, researching city and state policies, writing articles, and more. Most recently RPA won a hard fight to redirect millions from unnecessary policing to services which reduce poverty and increase safety.

Mike’s late wife, Margaret Jordan, was his close comrade in all the political work they took on together until she passed away in 2020. They are survived by their daughter Johanna, whom they adored. Johanna spoke for many when she described her dad as her “moral compass.”

Since joining DSA in 2017, Mike and Margaret advised local and national DSA leaders and campaigns. They were patient with a new generation of organizers figuring things out for themselves, and generous with the insight they’d gained over long activist careers.

Less well known are Mike’s incredible contributions in the transformational 1960s. While attending the University of Chicago in 1959, Mike became a national leader in the student peace movement, and afterward participated in nearly every political movement of the next decade. Chicago is also where Mike became open to socialist ideas, thanks to his peace and civil rights activism, joining the Young People’s Socialist League (YPSL). He was a committed socialist and socialist organization builder thereafter.

I knew Mike Parker when I was a student at the University of Chicago in the early 1960s. Mike was a brilliant advocate for workers and unions then, and he remained so for the rest of his life. Mike fought tirelessly for human solidarity and a more just and humane world. His life’s work and dedication should serve as an example for all of us.

Mike participated in the Civil Rights Movement, became a central leader in the 1964 Free Speech Movement in Berkeley, helped build anti-war protests and the Students for a Democratic Society (SDS), and organized boycotts in support of striking farmworkers. He was a key organizer of the Peace and Freedom Party in 1967–68 and helped form a coalition with the then-ascendant Black Panther Party. Together, the two organizations ran Panther leaders Eldridge Cleaver and Huey Newton for president and Congress respectively.

In the 1970s, Mike was a leader in the socialist organization International Socialists (IS). In Detroit, he became the mentor of the Red Tide, the IS’s socialist youth group of mostly African-American high school students. Among other issues taken up by the students, Red Tide built a national campaign to free Gary Tyler, a black student sentenced to death in Louisiana after an attack by white students in a newly integrated school. (Advocates eventually helped secure Tyler’s release years later.) Mike was loved and respected by the Red Tide youth, who called him “The P Funk” because he was “pure, uncut Funk,” as a former Red Tider recalled to Gay Semel for a forthcoming article for Jacobin. Few could have excelled like Mike at this complicated big sibling role: Mike encouraged the teenagers to self-organize but supported them in their endeavors, allowed them to make mistakes but helped them learn the right lessons.

After the IS merged with other socialist groups to form Solidarity, Mike continued to play a mentorship role in that organization until joining DSA in 2017.

Mike’s philosophy, which he described as “socialism from below,” understood that socialism was not possible or desirable unless the majority of working-class people were organized and willing to fight for socialism and create it democratically. This meant that Mike could never be cynical about ordinary people — whom mainstream ideology tells us are selfish, dull, lazy, or apathetic — even when the times seemed to encourage cynicism. As he explained in a 1997 talk on lessons he learned from the 1960s, “Massive and rapid change in political consciousness is a reasonable expectation.” He continued:

When we look around now it is hard to imagine masses of people engaging in selfless struggle, demanding collective solutions based on values which put the human experience first and personal economic wealth way down the list.

I became politically conscious in a period which was far worse. In the 1950s, McCarthyism was the tip of the iceberg. Capitalism provided for all (except the poor who were conveniently invisible in the culture). . . . The American Dream seemed to work (while Black people were conveniently segregated out of view). Socialism was either discredited and irrelevant . . . or it was the enemy.

Yet less than a decade later, tens of thousands, particularly among Blacks, considered themselves revolutionaries. . . . Hundreds of thousands participated in militant civil rights and anti-war struggles which ignored the laws and challenged the ability of the social apparatus to function.

Mike learned from his own experience that people’s consciousness tends to become open to radical change only through struggling together over more immediate issues. “As part of the struggle,” Mike said about the 1960s, “the rapid change of consciousness seemed natural. We felt ourselves being transformed.”

As a Marxist, Mike understood that the labor movement was of particular importance for socialism. Writing in 1973, Mike explains that workers’ struggles, especially union struggles,

Through his activism, his writing, his mentorship, and the organizations and movements for social and economic justice that he helped to build, Mike Parker has touched the lives of countless people. Most importantly, he has helped us feel a greater sense of our own collective power to change the world.

We in DSA will be forever grateful for Mike’s influence. His kindness and wisdom and his belief in the goodness and power of ordinary people give us confidence that our mission — to build democratic socialism in order to end oppression, exploitation, climate disaster, and war — is both just and possible. Mike was a tireless fighter for what’s right and a friend to so many. His extraordinary life will be an example for the next generation of activists of the best of what humanity can be.

Jeremy Gong has been a DSA member since 2016. He served as a co-chair of East Bay DSA and on DSA’s National Political Committee. In 2021, he moved to New York City.