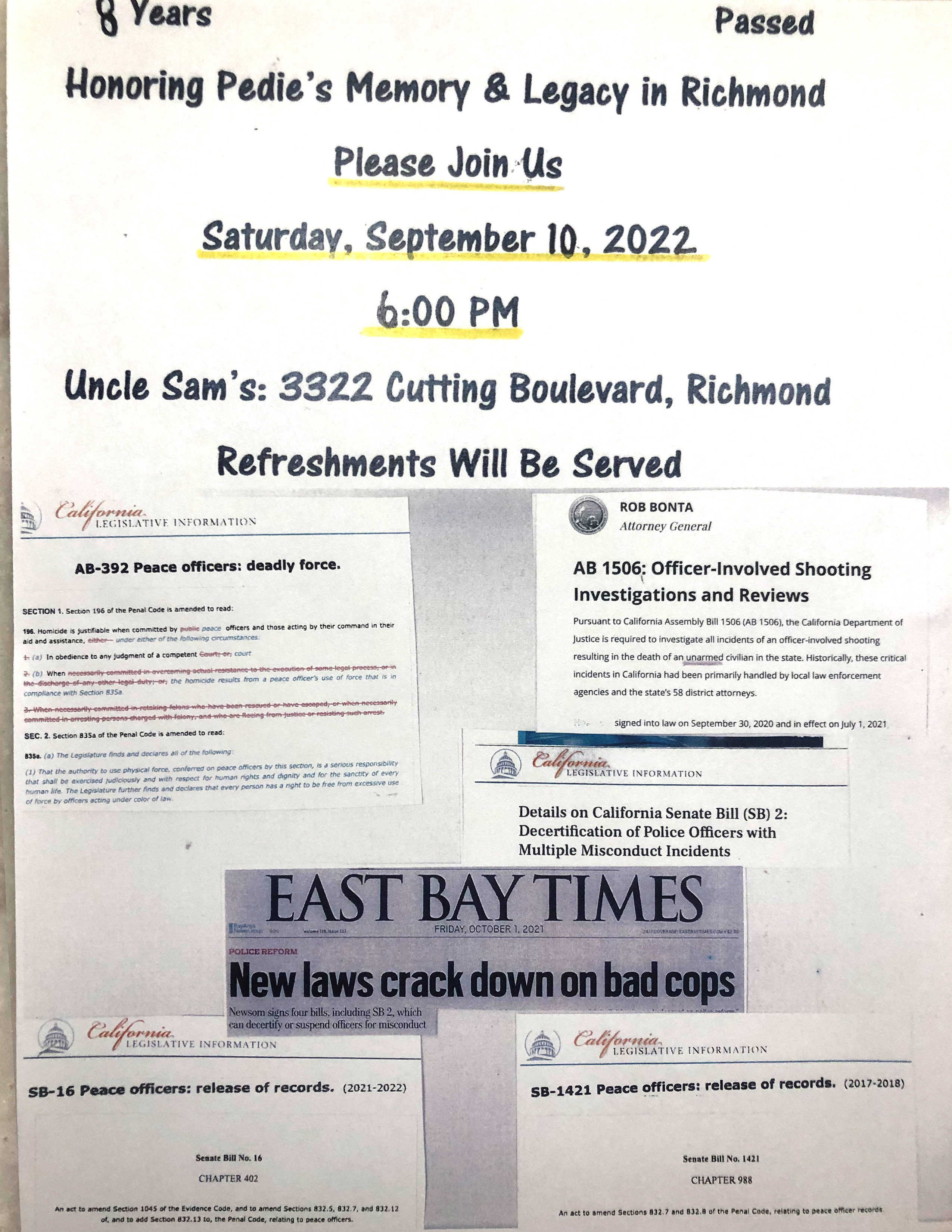 Richard "Pedie" Pedro Perez III was 24-years-old on September 14, 2014, when he was murdered by Richmond Police Department officer Wallace Jensen. Pedie was unarmed and nonviolent when he was shot at Uncle Sam’s Liquor & Market near his family’s business, Perez Brothers Trucking. The Perez family business has been located there for over thirty years, so Pedie grew up frequenting the store from toddlerhood. He was a staple in the neighborhood and known by neighbors, employees and owners of the store. Pedie had a reputation for helping those in need in whatever way he could and was loved by many.

Richmond’s Community Police Review Commission (CPRC) worked with an independent investigator to conduct a comprehensive review of the circumstances surrounding Pedie’s death. In 2018, the entire CPRC spent several hours receiving the report and asking questions of the investigator. The Commission voted 7-1 to accept the investigator’s recommendation substantiating the allegation of the use of unnecessary or excessive force.

Wallace Jensen was not ultimately prosecuted. He retired from the force and will receive half of his police salary for the rest of his life. He has also retained employment as armed security.

The Perez Family has continued to fight for Justice for Pedie and seeks accountability from the City of Richmond. Pedie’s family regularly attended Richmond City Council meetings and CPRC meetings until the COVID-19 pandemic necessitated virtual meetings. Their advocacy for more police transparency and oversight extends beyond Richmond. They support others whose loved ones were killed by law enforcement and advocate at many levels of government to change laws which protect the privacy of the police and inhibit police accountability. The legislation they have supported includes:

Community members are welcome to join Pedie’s loved ones and attend the vigil on Sept. 10 to honor Pedie’s life and fight for justice. This event has also been endorsed by the Oscar Grant Committee, a Bay Area group founded in 2010 in honor of Oscar Grant against police brutality and state repression. Resources will be available at the vigil so community members can learn more about how to file a complaint with Richmond’s CPRC.