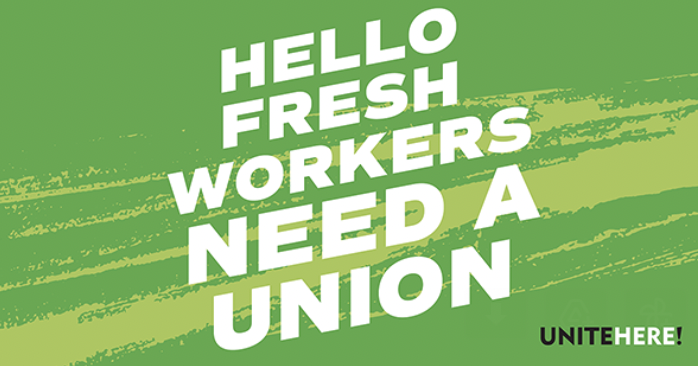 Workers are just weeks away from their unionization vote and we want to show them how much our community has their back. There will be a HelloFresh Worker Solidarity Pep Rally & Art Build on November 11 to cheer on workers coming on & off of two of their work shifts with signs and noisemakers. We will also fill out postcards with messages of support and solidarity for workers to add to our art installation.

To get the plan of where to meet up, RSVP here: tinyurl.com/nov11richmondhf

On October 19, 2021, Richmond City Council unanimously adopted a resolution in support of HelloFresh factory workers and their unionization drive. The resolution, co-sponsored by Councilmembers Claudia Jimenez and Gayle McLaughlin, demands that management commit to a fair election without intimidation and fear tactics designed to discourage employees from joining the union.

The company has sent in highly-paid union avoidance specialists to talk to workers in English and Spanish. On Thursday, UNITE HERE Local 2850 filed unfair labor practice charges with the National Labor Relations Board, alleging the company has threatened workers with adverse consequences for union activity, surveilling employees’ union activity, transferring a union supporter to a different position, and denying a union supporter accommodations for a workplace injury.

This union drive is part of a remarkable wave of unionization efforts and labor strikes— so much so that October 2021 has been dubbed “Striketober” by the national media. Frontline workers and the industrial sector have assumed an offensive stance not seen on this scale in labor relations since the Reagan Administration. In the past month alone, it is estimated that over 100,000 American workers either participated in or prepared for a strike in their workplace.

As both a longtime shop steward and Richmond councilmember, I will do everything within my power as an elected official to support your urgent, meaningful effort. I am familiar with tactics by management in discouraging worker solidarity and I ask that management to allow workers [to] decide without interference or intimidation for representation and protecting their rights. Workers organizing for a better workplace are a shining example of bravery and I stand in solidarity with you in this fight.

Richmond HelloFresh workers have filed for a National Labor Relations Board election, which will conclude on December 14.  Safety issues, management disrespect, and inadequate wages and benefits are at the heart of the union drive. In 2020, the HelloFresh factory at 2041 Factory Street was the site of the largest COVID-19 outbreak in Contra Costa County, with 171 documented cases and one death.

In a survey of 233 out of 900 Richmond HelloFresh workers, UNITE HERE determined that in the past year, 82% said they worried about paying rent or mortgage, and 43% respondents said they experienced hunger because they did not have enough money to pay for food.

The resolution comes on the heels of Richmond workers earning national media attention (VICE: "HelloFresh Workers Unionize to Improve Brutal Working Conditions", NPR) for seeking to be the first union in the emerging meal kit industry. Boosted by the pandemic, HelloFresh revenue soared to 4.4 billion dollars in 2020, with more than half of that coming from U.S. sales. Workers in Richmond prep, assemble, box and prepare to ship as many as 25,000 boxes a day for distribution throughout the West Coast.

This piece has been adapted from materials developed by UNITE HERE.