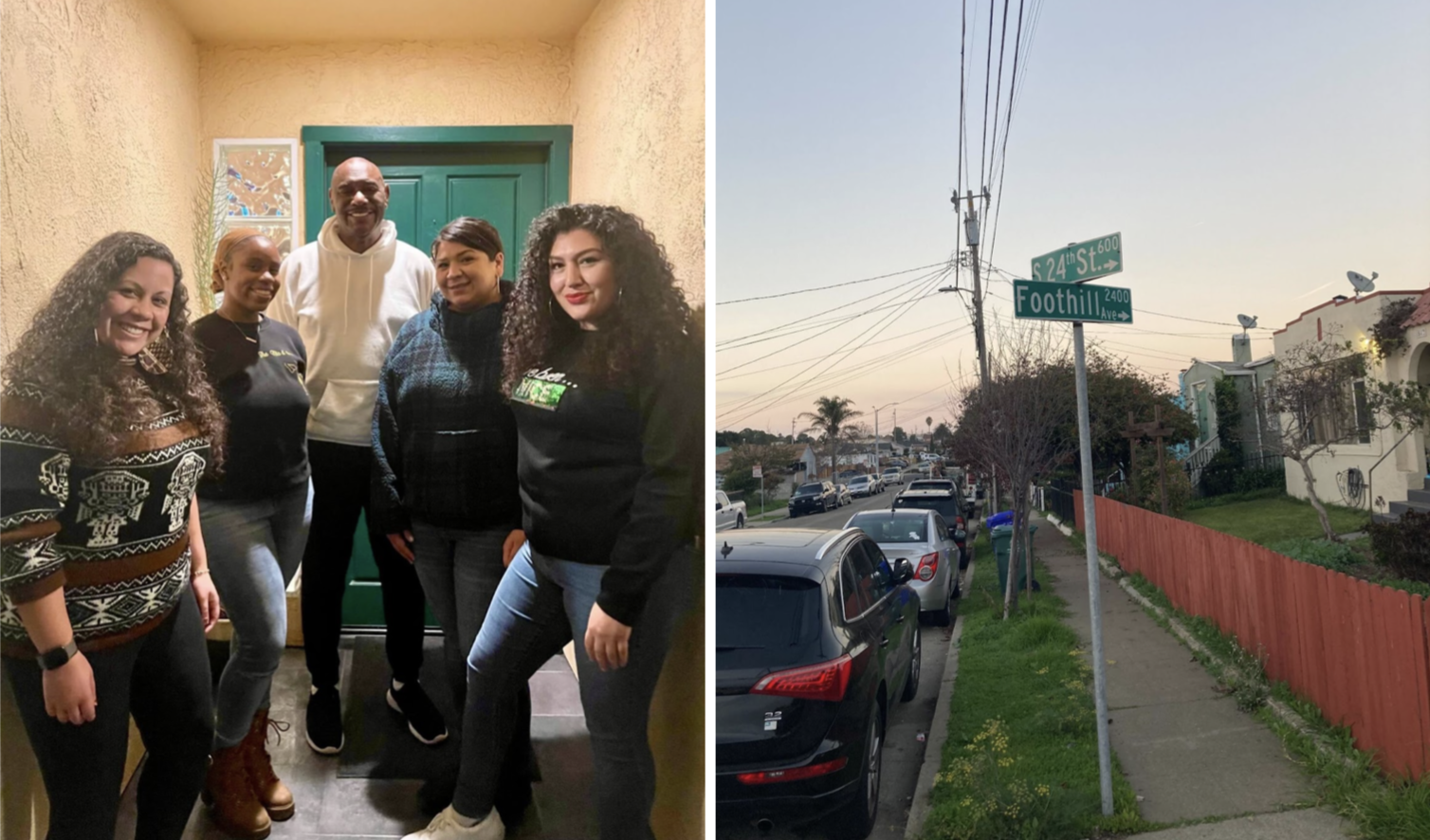 Right: Image of S.24th St/Foothill Ave. in the Southside neighborhood where building is located.

The purchase on S. 24th Street is a culmination of the visioning and determination that took place over the past 18 months to grow Richmond LAND into a vessel for grassroots power that offers alternatives to safe and stable housing and prevents further displacement of existing residents through the Community Land Trust (CLT) model.

In 2020 it was clear that Richmond LAND’s vision for community-controlled housing and development would be fundamentally altered. The organization’s efforts would no longer be just about repairing, mending, and revitalizing the community, which had been impacted by decades of disinvestment, displacement, and demographic shifts after the 2008 financial crash. Now faced with the unprecedented public health crisis of COVID-19 and the subsequent economic downturn of epic proportions, their work took on a whole new meaning.

While massive organizing efforts were underway to offer tenant and homeowner relief and protections, the team at Richmond LAND sought to take their own experiences of the crippling effects of the foreclosure crisis into the movement for community-controlled housing. They began pouring their energy into figuring out how a Just Recovery could be possible in the aftermath of tremendous hardship and uncertainty. For months, they participated in every opportunity to join working groups, state and regional advocacy coalitions, and engage community members to better understand the pandemic housing challenges and solutions. Within weeks of California's Housing is Key rent relief program launch, Richmond LAND started outreach for the Emergency Rental Assistance Program (ERAP) in Richmond and West Contra Costa County. Many tenants shared their experiences with landlord harassment and intimidation, despite codified renter protections. Others were still anxious about the future of their homes, unsure whether ERAP would cover their needs and guarantee their stability. A handful of residents faced uncertainty in knowing their landlords were gearing up to sell their buildings.

Upon hearing these realities, Richmond LAND immediately began advocating that a substantial portion of discretionary government stimulus funds be spent on affordable housing, particularly highlighting the need for interventions to stabilize financially distressed residential buildings at heightened risk of default, foreclosure, or sale. With the eviction moratorium set to expire and no clear timeline of how and when state resources would get released to address foreclosure intervention or housing preservation there was an urgent need to uncover and create as many neighborhood stabilization resources as possible.

While on a planning call with the Alliance of Californians for Community Empowerment (ACCE) Richmond organizer Edith Pastrano one afternoon, she shared that she was on her way to talk to two families that contacted her expressing concerns of being forced out of their homes. A few days later Richmond LAND got a call from the ACCE Director of Contra Costa and their statewide Legal Director reaching out to determine whether Richmond LAND would be interested in working with the residents to buy back the building. After sitting down with the residents and hearing their situation, Richmond LAND’s suspicion that large private equity groups were gearing up to purchase local real estate was confirmed. Dale Riggins, a small landlord on the Southside of Richmond, and retired City of Richmond employee, had lost his property to foreclosure during the pandemic. Not only had he lost the property his mother built and that he maintained for years through providing below market rate rent, he was also being served an eviction notice by the new owner.

Mr. Riggins and Cynthia Ocasio-Hernandez, a downstairs tenant, recounted the story of trying to decipher what had happened, who was the new owner of the building, and what options they had for remaining on the property together. By that point, Cynthia had dozens of documents recounting her experience with people arriving at the home offering cash for keys, alleged property managers and real estate agents claiming to represent banks, and even a mysterious LLC buyer.

The residents were shaken by the uncertainty of the situation. They had no idea what to expect from the new owner, had yet to sign a new lease; and to make matters worse, as the former owner of the building, Mr. Riggins had little to no tenant protections and was facing imminent displacement. Luckily, Mr. Riggins had the support of Cynthia, her mother Ana, and husband Jonathan, all longtime tenants of the building who were determined to find a way for everyone to remain in place. Their sole non-negotiable in partnering with Richmond LAND to save the building was, “We stay together!”

Their fierce advocacy and deep commitment to mutual support were motivations for Richmond LAND to find a pathway forward. Richmond LAND tracked down the owner and learned that their plan was to re-sell the property on the market for a much larger amount than what they paid at auction. Community land trusts across the state often rely on government subsidies to finance their housing projects. In a city and county with little to no housing funds available, Richmond LAND scrambled to find a Community Development Financial Institution (CDFI) lender willing to offer manageable debt financing terms.

In the end, Richmond LAND succeeded in securing the financing to purchase the S. 24th St. building and stabilize Mr. Riggins and Cynthia’s family. The residents no longer have to fear eviction, and the property is permanently safe from real estate speculation: as a community land trust, Richmond LAND is legally restricted from selling its assets (of which S. 24th is now part) on the open market.

Meanwhile, the residents can get on a collective path toward joint ownership of the building with the support from Richmond LAND. As the first lessee members of the organization, Mr. Riggins and Cynthia will work with Richmond LAND to establish a stewardship program that will benefit future residents interested in pursuing a path from renter to owner.

As Richmond LAND advances their work as a housing practitioner, they are acutely aware that, in order to replicate this effort and grow housing preservation acquisitions, it is going to require new public investments in keeping residents in place and stably housed, not just increasing resources on the production side of affordable housing. New private capital streams like spend-down philanthropy and redistributive investment strategies will also be needed to compete against the massive capital that predatory private investment firms have at their disposal to further commodify housing.