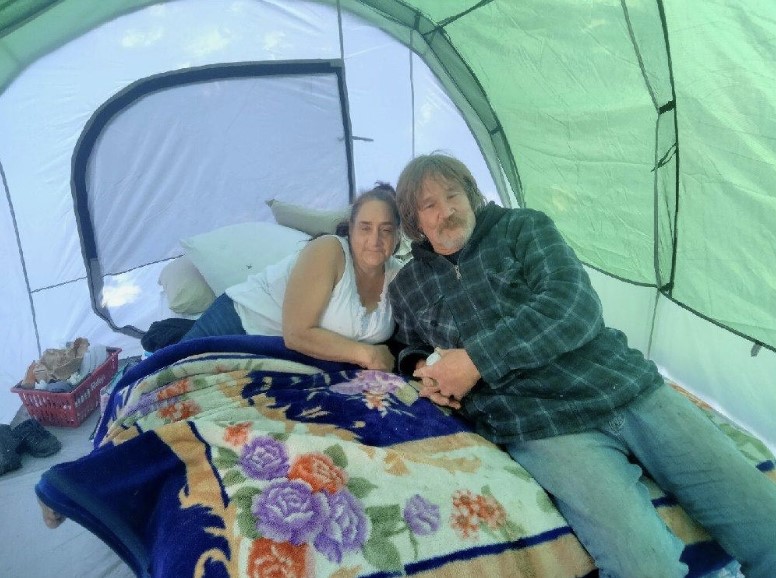 David first became connected to SOS when the Shower Power trailer started making weekly visits to the El Portal Church of Christ parking lot a short walk from Dave and Tina’s tent site. At the same time, the SOS Outreach team started getting acquainted with camp residents to coordinate trash clean ups, and assess peoples’ needs. David volunteered to be a steward at the camp, publicizing the showers and helping distribute food and clothing donations.

David and Tina’s tent is set amid some trees and green cover on a hillside near San Pablo Creek. To reach their neat and tidy campsite I had to walk through the encampment that surrounds them. I saw the makeshift shelters, tents, trash, and debris that is common in encampments. A few residents gathered around a small campfire.

Tina is 50 years old and has been homeless on and off for 10 years. She suffers from a left hip that has mostly fallen apart due to her arthritis. She takes nothing for the pain and grinds through the days leaning on a bike and struggling to walk up and down the dirt hillside they live on just trying to stay clean and fed. “Without David's help and companionship I'd be living in doorways or worse,” she said.  “I need a hip replacement,” she said, “but the doctors won’t ok it because I’d need three weeks of recuperation and physical therapy which would be impossible while I’m living in a tent without heat, a bathroom and running water.”

David Alford is a soft spoken man, he is proud that he has become the SOS steward of the encampment he lives in. He’s been homeless off and on since he was a teenager. “I’ve seen the high road, the low road, and there’s been a lot more low than high,” he said.

David and Tina have been surviving with the help of food stamps, and the occasional work David gets as a bicycle mechanic and a heavy equipment operator. Tina was recently approved for SSI payments of $1100 a month, but as a result, her food stamp allowance was reduced from $250 a month to just $23. Their combined income is still far short of being able to rent an apartment.

“This place and situation robs you of your self esteem, and creates a lot of hopelessness,” Tina said. “We are subject to abuse almost daily, people don't want us around and they let us know it and that creates even more feelings of despair. It’s a daily struggle just getting food and water. You need it for cooking, drinking, washing, and we have to carry in every drop.”

What makes a difference for us is help on a consistent basis such as is provided by SOS. It shows us that people do care about us and this stirs up a little hope in the face of our tough lives.

David said, “I want a home with my girl, a job, and food on a regular basis. Tina chimed in, “There is more to life than this. We want some place safe with a roof, hot water, and hope.”