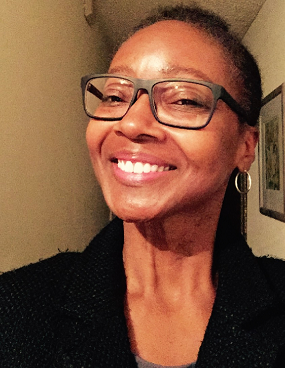 Who is the RPA? It’s made up of volunteers with passion, progressive values, and who love Richmond. In this new series, we get to know new faces on the RPA Steering Committee. We begin with Brenda Williams, a newly-elected Steering Committee member who is the organizational representative for Richmond Rainbow Pride. Her recent film Beyond Hate explored themes of free speech, including Chevron’s involvement in Richmond’s 2014 elections and the experiences of Councilmember Jovanka Beckles as she faced homophobia and racism.

BW: Fortunately, there is no one way to create change and progress.  But with certainty action is required.  Ted Kennedy said once that he just kept showing up. Eventually, people would say, “What about that guy over there? Let him do this. He's always around.”  So he kept showing up and doing what he could... I learned the same lesson from my dad. It's great to dream big, but somebody has to be willing to show up and actually do the work.

When there is work being done simultaneously all over and you string all of that work together, you have the potential for a major shift and that shift is the change. The small changes are fantastic because they allow people to see the possibilities of what can be. But it is with concerted effort and action that the big shifts occur. Inspiration allows people to step out of their comfort zone and ensure more change. For myself, I want to be part of what inspires people to work towards changing what we know needs to be changed and creating what we want in its place.

TA: How does the RPA fit in?

BW: My idea is essentially when you find someone or a group who gets it right; join them to make it happen.  And if no one is making happen what you know needs to be happening, be the catalyst to get it started.  I think RPA gets it right, so joining their efforts makes sense.

TA: As  filmmaker, you particularly believe in dialogue as an avenue for change

BW: Talking out loud creates an atmosphere for change. It's a great way to stimulate people and bring about better and stronger discussions and ideas. Closed doors are more frightening because of the lack of transparency. So I love the idea of town hall style meetings and open dialogues but I also believe in capturing those dialogues so action items can be uncovered and initiated.

A great example of continuously being open to discussions with all types of people is that this year I received an editorial grant for my recent film “Against Hate.”  I selected a filmmaker who in reviewing the footage got a chance to look closely at Richmond politics and engage in dialog with me about the salient points made in the film. She saw the grace and poise Jovanka displayed, but also we talked candidly about the success of RPA and how groups like this have to exist all over the country so we can locally affect the outcome of our future and our politics; we all have to be involved.  I received an email today from the filmmaker -- who already was a social justice activist -- and she is running for an Assembly District seat and we inspired her to do this!  That’s change. And to survive the next four years, we need this change over and over happening all across America.