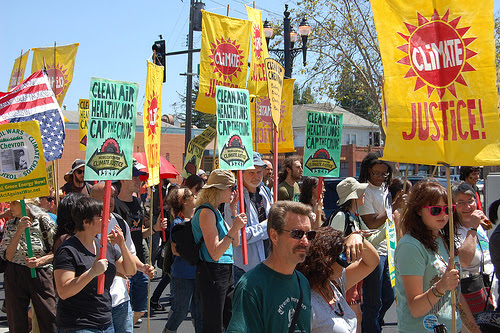 We are coming up to a critical juncture in the four-year effort to set transparent, enforceable caps on refinery emissions.

At issue is Bay Area Air Quality Management District Rule 12-16, which would finally set facility-wide emission limits on greenhouse gases, particulates, and toxic sulfur oxide and nitrous oxide from refineries. Right now BAAQMD only regulates various parts of refineries, and if the District does not quickly put a facility-wide cap on emissions, oil refiners such as Chevron will be allowed to process dirtier, heavier crude (such as tar sands) that could increase overall refinery emissions by 40-100 percent region-wide.

What would that mean for public health? Particulate matter air pollution already kills an estimated 1,700-2,500 people in the Bay Area. But public health experts estimate that if Rule 12-16 is not passed, and oil companies are able to bring new infrastructure online to process tar sands, over the 40-year lifetime of those facilities, 800 to 3,000 more Bay Area residents will die prematurely. And of course, the toxic burden will not be shared equally among Bay Area denizens. For disadvantaged communities who live in toxic hotspots such as Richmond, their mortality burden could be 8-12 times greater than the average Bay Area resident.

So we urgently need facility-wide emission caps – and we also need Rule 12-16 to be robust. Unfortunately, District staff, who have been dragging their feet for years, seem to be deliberately undermining things. The Draft Environmental Impact Report they have prepared on the Rule is so deficient that it will be vulnerable to lawsuits by oil refiners who want to attack it.