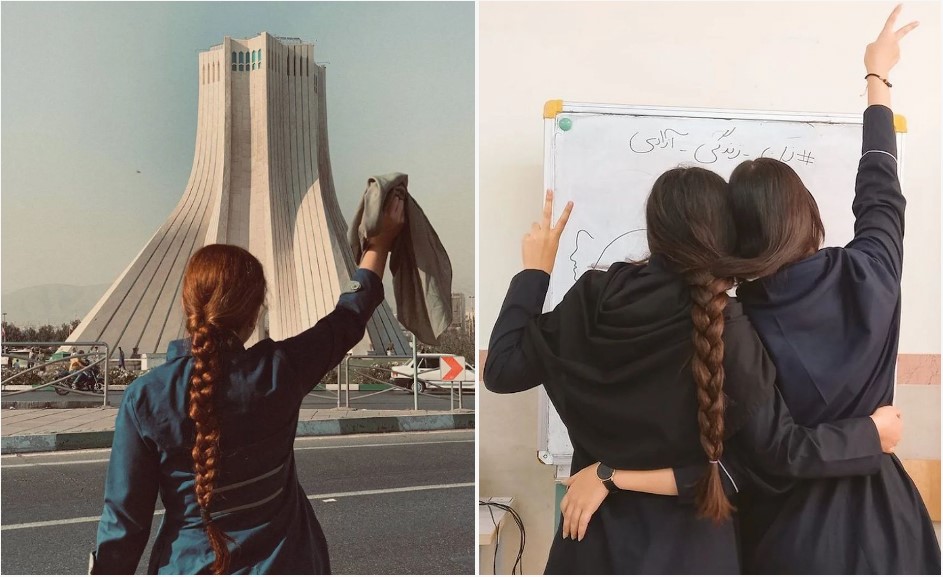 Sometime last week, I spoke to my mother on the phone about the protests happening in Iran. Major unrest has spread across the country since the police murder of Jîna Amini, a Kurdish woman who was arrested in Tehran in mid-September for wearing her hijab too loosely. My mom had a lot to say, but a particular sliver of our conversation stood out to me. 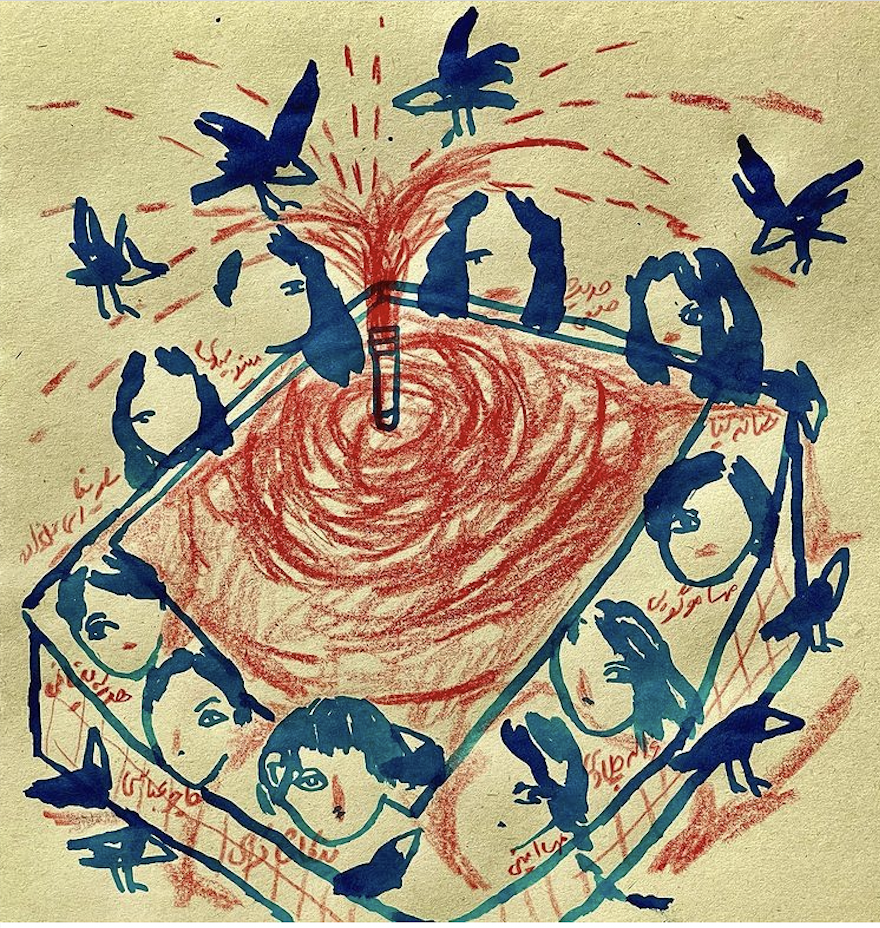 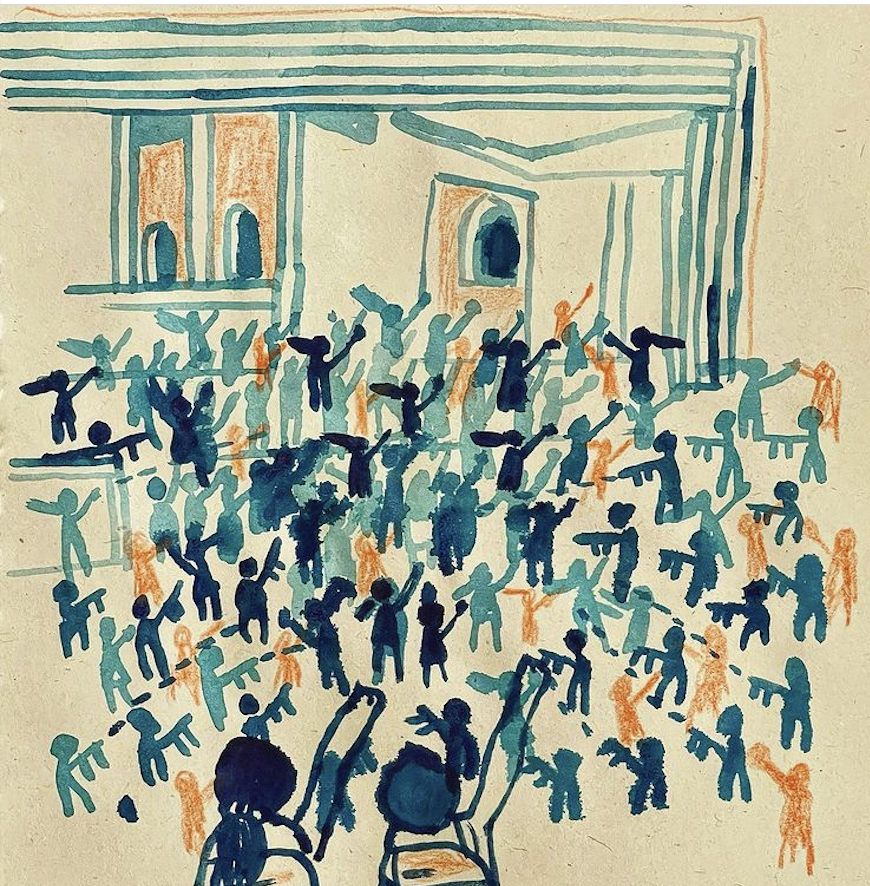 She recalled a particular instance of visiting the Grand Bazaar in Tehran with my cousin. While they shopped, several police officers were walking through the corridors, looking for two girls they had spotted wearing the hijab inappropriately (i.e., showing too much hair). The police kept asking shoppers if they had seen which way the girls had gone—and every person the police asked kept intentionally steering the police the wrong way.

"There is no woman in Iran," my mom said, "who has escaped interacting with the morality police. Or parents, or husbands, or brothers who haven't had to pick their daughters or wives or sisters up from the police station because of some overzealous police officer. We all know what they're like. And that's what everyone has had enough of—the complete arbitrariness of it all."

Since the protests began, I've been asked several times to share my thoughts on what's happening in Iran. So here's where I've landed: there are parallels between the protests in Iran and those for racial justice in the United States that I believe we would do well to learn from. I’m finding the comparison being made between police in the United States and the so-called “morality police” in Iran apt. My personal experiences with the morality police in Iran have been wide-ranging, from irritating to terrifying. But ultimately, as with here, they are security forces who can lash out violently as they see fit.

Unsurprisingly, Iranian state media has tried to demonize protesters in many ways. The most interesting way, to me, has been the government’s focus on the destruction of ambulances: 72 emergency vehicles have been targeted by protesters, according to Iranian officials.

The appeal of emphasizing this destruction is clear: unruly rioters are vandalizing public infrastructure, parts of civil society that are indisputably positive, that no good faith actor would dare touch.

So, the state’s focus on that part makes sense to me. What I find fascinating is Western media not focusing on the destruction of property— and very appropriately so. The raw fury of the Iranian people at decades of violent and bureaucratic forms of oppression, we accept, seems more than justified. After what law enforcement and the government has done to them, how can you blame them?

Even when Western journalists briefly discuss the ambulance piece, it’s brief and with trust in the Iranian people on the ground. Again, appropriately so. Security forces have sometimes been using ambulances to infiltrate crowds; the wounded are loaded into ambulances during protests and then arrested by waiting police.

These buildings and vehicles are not just literal structures that house civil services. They are also symbolic structures of the repressive state. Under massive state power, faceless corporations with endless managerial layers, where do we direct our ire at injustice? All we can do is locate metonymies— stores stand in for poverty, civic buildings for bureaucratic failures, hijabs for oppression, police cars for racism. It’s ridiculous to discuss optics when oppressed people are already fighting an optical illusion in the first place.

We believe that the people’s fury is needed, warranted. No hand wringing about the optics of rioting. To us, these are valid and necessary protests. The Iranian people are very brave. 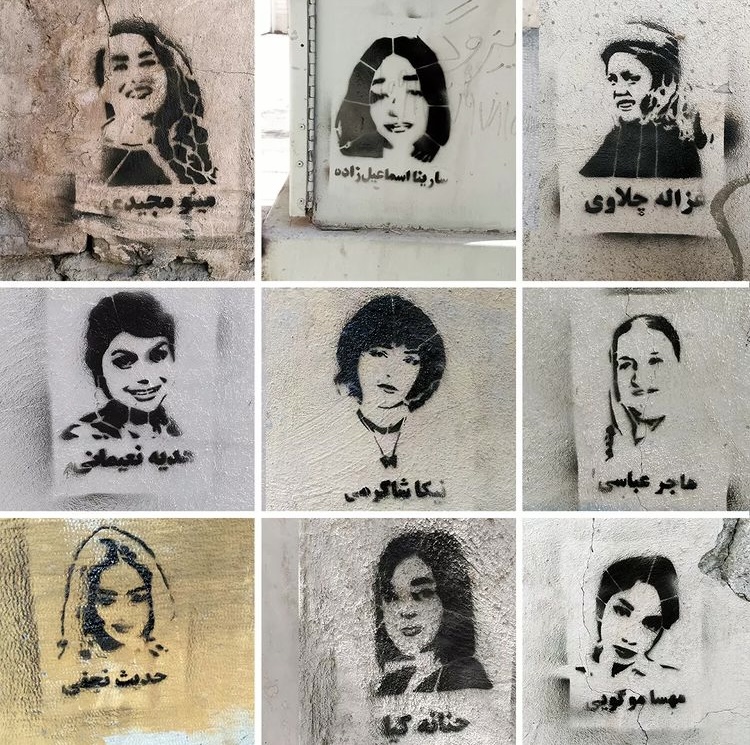 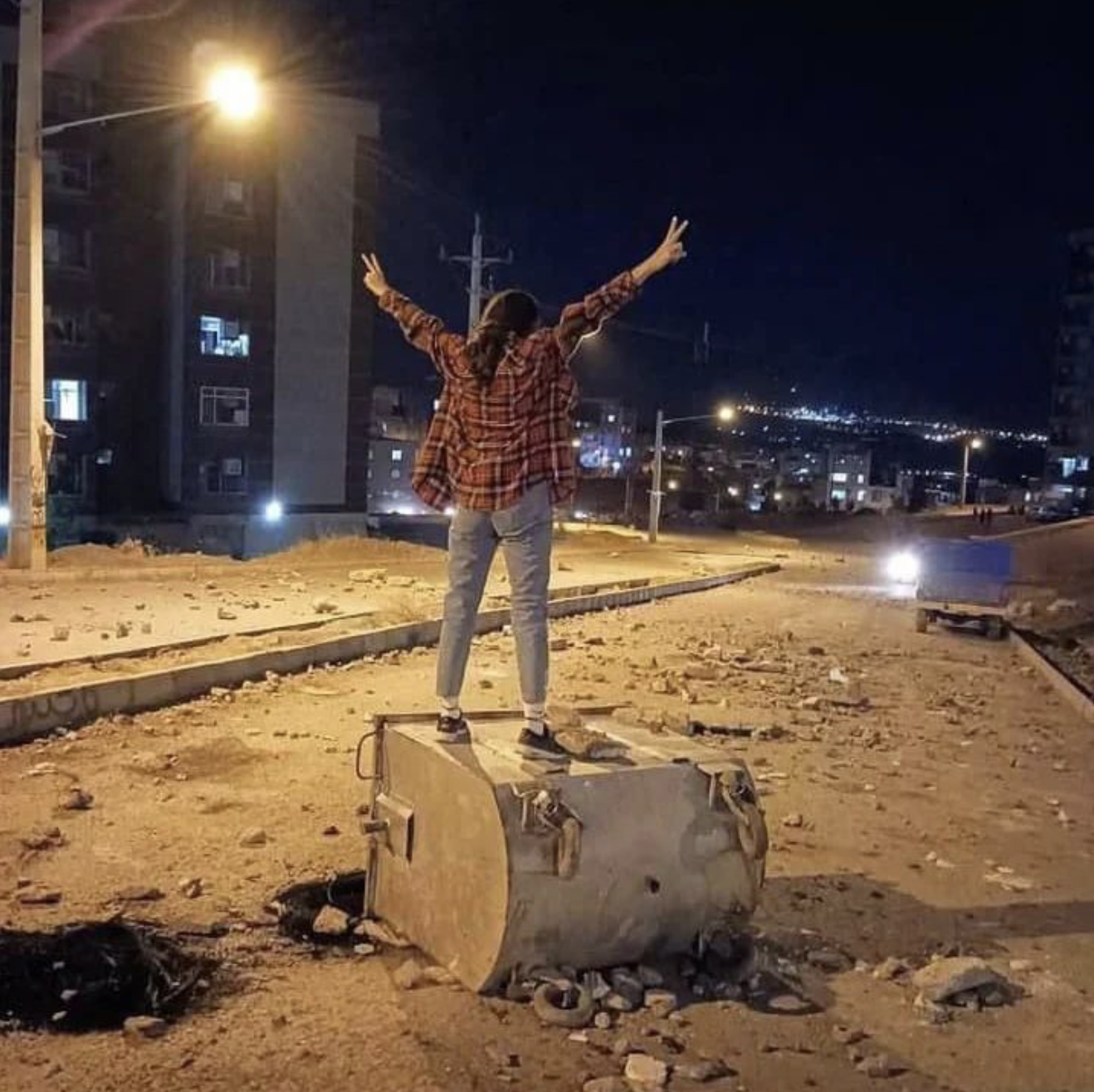 Right: An unknown woman without a headscarf in Sanandaj, the biggest city in Iran's Kurdistan province.

Western media also—again, rightfully so— has reported the deaths of young Iranian protestors with incredible suspicion, despite the Iranian government’s absolutely pathetic attempts to explain them away as suicide or medical incidents while in custody. The police attributed the death of 22-year-old Jîna Amini to a heart attack or “underlying conditions” (This is her actual name, by the way. She was a Kurdish woman, and Mahsa is her “official” Persian name, used on state documents. A parallel in our own history is the forced Anglicization of Latino names in American schools throughout the 20th century.) A protester, 16-year-old Nika Shakarami, mysteriously fell to her death from a tall building, according to police officials. Sarina Esmailzadeh, aged 17, was beaten violently by police during the protests; her death has been ruled a suicide, with local officials saying she jumped to her death. And so on.

The Iranian people, by and large, accept that their government is lying to them. Humans rights groups and international observers seem to, as well.

Here, how can we not recall the deaths of Sandra Bland, Kayla Moore, Freddie Gray, Tamisha Anderson, Elijah McClain, and so many more? I think we should.

Finally, another fascinating element of these protests are reports of Iranian women setting their hijabs on fire— even by women who prefer wearing the hijab and identify as  practicing Muslims (although there are much fewer of these women in Iran than we’ve been led to think. Try visiting Tehran in summer: there is never so much complaining as when we’re getting ready to leave the house, and everyone has to put on their hijab and manteu).

This act of solidarity is stunningly beautiful. Muslim women in Iran and internationally have been able to recognize that burning the hijab isn’t a perversion of their faith. It’s a protest against the weaponization of their faith. The actual perversion of Islam, it’s understood, is an oppressive state apparatus that uses religion to control its populace. To protest mandatory hijab, even by setting it on fire, is to reclaim it from the Iranian state.

Conversely, the Protestant American mind becomes very Catholic when confronted with its own cultural symbols. As if assessing the Eucharist, the American flag magically ceases to become a representation; so too with civil war statues or the National Anthem. And so maybe it’s little wonder we can hardly manage to consider that a riot in the wake of a police killing may be more than crude property destruction. We can hardly treat overt emblems of state power as the symbols they are.

All of this is, I believe, a big part of the international impatience with Americans and our politics. Having an embarrassing leader like Donald Trump is small potatoes: many countries find their leaders utterly horrifying, and they bear those leaders without the hope of having them out the door in four or eight years.

No, it’s that we think we are able to assess movements abroad with such clarity, are ready to condemn or support with such enthusiasm, yet stumble through our domestic state violence with such absurd equivocation. 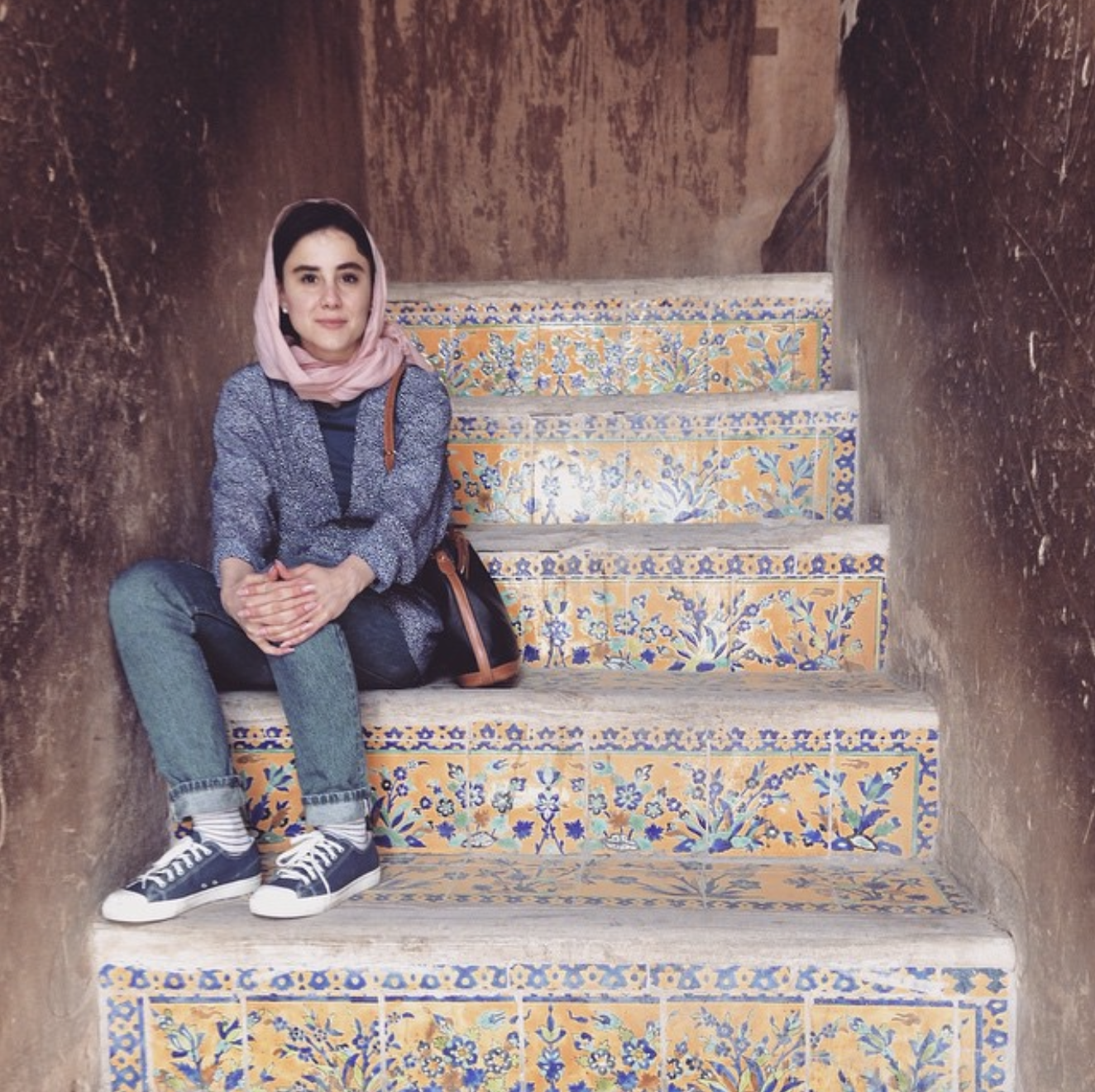 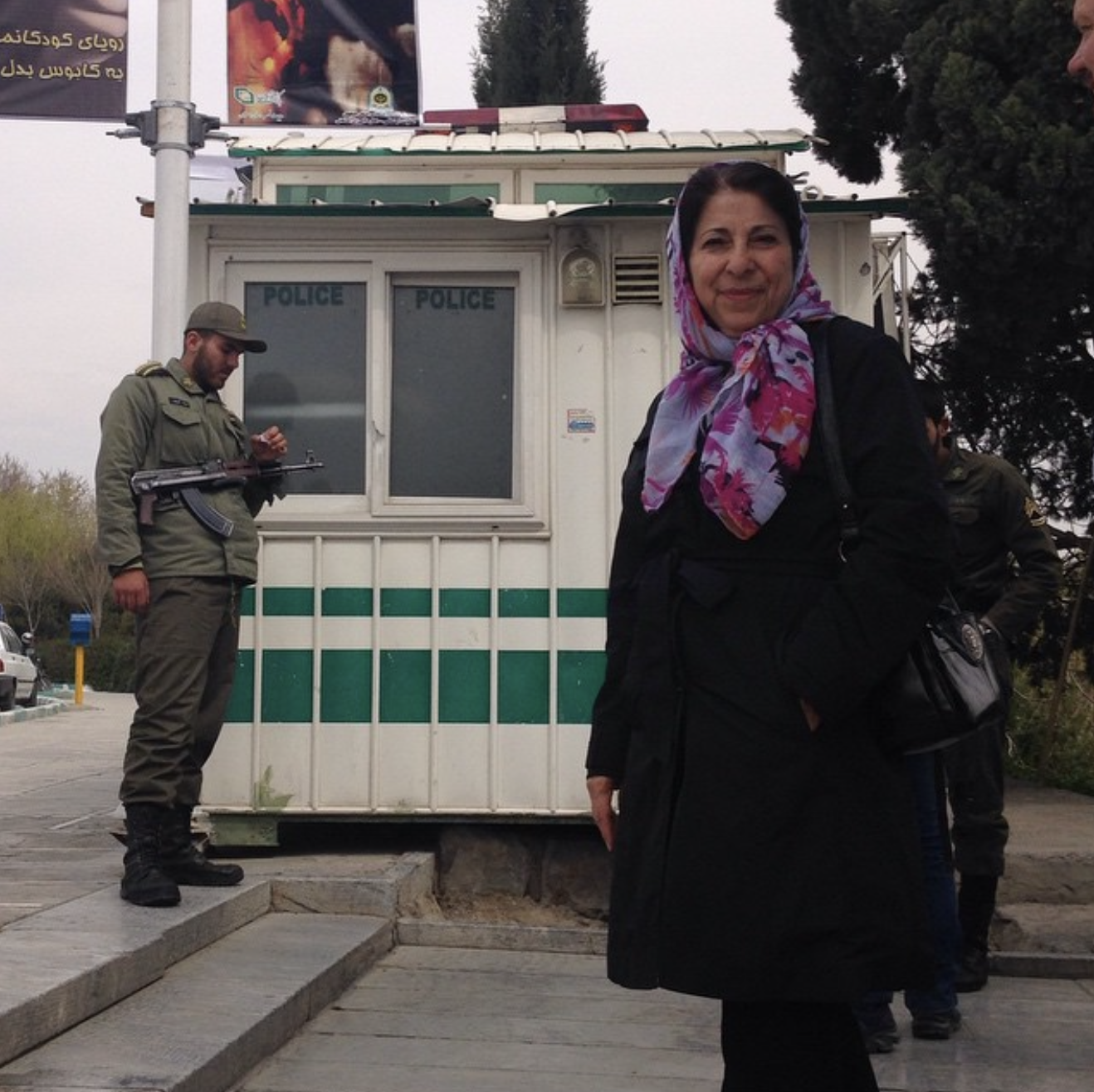 My mother and I visiting Isfahan, Iran in March 2015. Three things stand out to me about these photos now. First, Isfahan is considered much more religious and conservative than other major Iranian metropolises—but police, for whatever reason, left us alone. Second, I remember generally feeling that we looked notably conservative next to Iranian women: we were wearing our hijabs more modestly than many. Finally, it's worth noting that Jîna Amini was arrested and killed for wearing her hijab in the same way we did, pictured here. What's considered too illegal is completely up to police.

Just this week, oil workers in Iran joined the protests by going on strike. This profound solidarity—across ethnic, gender, class lines, and religious lines—only seems possible if we can collectively metabolize our most meaningful symbols historically. Perhaps it’s when your own body itself becomes a signifier rather than a vessel of your personhood—an object to be remarked upon, policed, mediated through religion and racism and other oppressions— that one knows symbols can be many things, all at once. A woman’s hair isn’t just hair, but also lust, sin, defiance, liberation. A hijab isn’t just piety: it’s community, recognition, patriarchy, state power.