Stand Up To Mayor Butt's Abuse of Power

Stand Up To Mayor Butt's Abuse of Power

In previous Tom Butt e-forums, the Mayor tried to tear down Marilyn Langlois, a long-time progressive activist and one of the RPA's endorsed candidates for the vacant City Council seat.  It was hard to see a sitting mayor sling mud, but Marilyn rose above it, and many of us dismissed the incident as a distasteful but not totally unexpected example of what happens when a person seeks political office in Richmond. 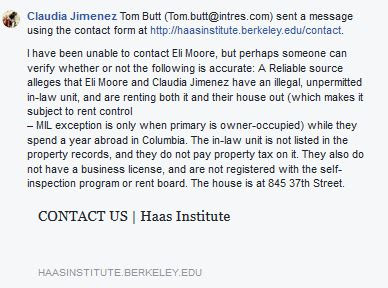 The e-forum Mayor Butt sent this past week was different. It shows that the Mayor will cross any line to further his political career. In his missive, he admits to running a campaign to discredit and destroy two more Richmond progressive activists, Claudia Jimenez and Eli Moore.  Supposedly acting on a tip from a neighbor, the Mayor himself began investigating whether Claudia and Eli were breaking Richmond rental law while away on sabbatical.  He went as far as to contact Eli's employer, supposedly to ask if UC Berkeley knew anything about Eli's rental practices! More likely, Mayor Butt was hoping Eli would be discredited, disciplined, or fired from his job.  When his e-forum describing all this went public, people began to criticize the Mayor on social media for misusing his power as an elected official to harass people for political gain.  Mayor Butt himself responded to say he was trying to "drain the swamp," invoking the words of Donald Trump.

Eli and Claudia have both written public responses to Mayor Butt.

Why is Mayor Butt so angry?  Claudia advocated for the Richmond rent control laws that Butt opposed.  And earlier in the week Eli had the audacity to express reservations about the economic impact of the ferry project that Butt has championed.  Those two things, plus the fact they are members of the RPA, were enough to earn them a spot on the mayor's enemy list. Butt is convinced that he must destroy the the Richmond progressive community in order to win the mayor's seat again.  In writing this, I am keenly aware that the Butt family is now pouring through my records looking for dirt on me and my family, googling the phone number of my employer, trying to decide if I am worthy of an e-forum attack -- it's an unpleasant feeling, and not one any of us should have.

Let's tell Mayor Butt that his abuse of power has not gone unnoticed and will not be tolerated.  You can email him at [email protected], call him at 510-620-6581, or post a message on his Facebook page.